Mom Docent: A Quiet Retreat to the Botanical Garden Library and Terrace 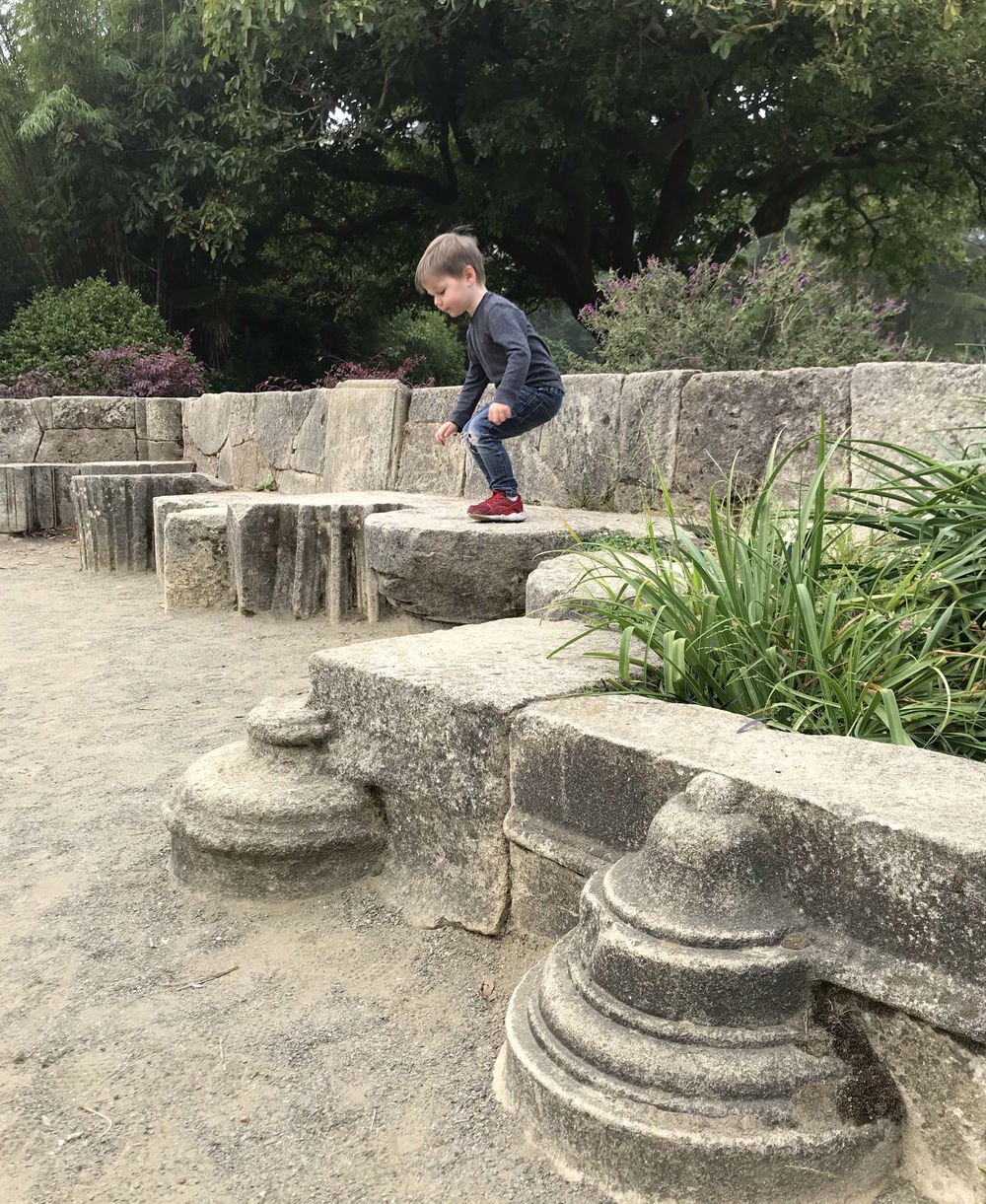 There's no time to read the plaques while tending to the herd! Enter Mom Docent, a new City Blocks series that will be full of stories, tips, and suggested activities for Bay Area sites, museums, paintings, and public works of art. Each entry is intended to be read before heading out to the site so that you can add some context and meaning for your kids (and yourself). Impress your children with your expertise, we won't tell them you heard it here first!

The library is located just inside the San Francisco Botanical Garden gate closest to 9th Avenue. It is open from 10am-4pm every day except Tuesday, with a story time (suitable for children aged 4-8) at 10:30am every first and third Sunday, followed by an 11am guided walk through the garden. The Botanical Garden itself (and the Library Terrace) are open 7:30am-6:00pm every day.

This is a teeny library compared to some of our San Francisco public branches, and you can’t check out books unless you are a Botanical Garden member or an SFUSD teacher. But it's peaceful and quiet. There's a small nook near a huge window with kids’ books, puppets, cushions for sitting, and a few puzzles. Seasonal books are displayed on top of the shelves. Adults at the big tables may be reading or researching—it has the most comprehensive horticultural reference collections in California— so warn your kids ahead of time that they have to be respectful.

We spent a solid 30 minutes here, whisper-reading and playing with the magnetic puzzles. It may have just been a good day for us, but I credit the atmosphere. When you are all ready to leave the cocoon and head back outside, proceed through the Botanical Garden entrance. Make sure to have your ID; SF residents get in free. Just after the admission booth, turn left to get to the Library Terrace, where benches are placed amid a quarry of stones.

As you sit and have lunch (or more likely, climb around), you can tell your kids that these very stones once housed monks in the Spanish countryside…800 years ago.

The monastery was called Santa Maria De Ovila, and it was founded in 1188 in Trillo, in what had been Moorish territory just a few years before. The monks were from the Cistercian order, and they followed the basic tenets of St. Benedict: they had to work with their hands and they had to stay silent.

And here you can propose to your kids an elevated version of the silent game: “Vow of Silence” (p.s. It didn’t work with my 6 and 3 year old, and technically, the monks didn’t take a vow of absolute silence). You can explain that the monks were only allowed to speak for two reasons: to communicate during basic work functions when hand gestures didn’t cut it, and to converse with a superior about spiritual issues. Small chit-chat was allowed only on very special occasions. Otherwise, the monks practiced silence as they went about their long day of prayer and work.

Additions and repairs to the monastery continued on for 400 years, so the stone you are sitting on may have been carved anywhere between 1200 and 1600. See if you and your kids can find some identifiable building parts among the piles. While you look around, notice the simplicity of the carvings. The style has been called the “architecture of silence”: austere, no color, few decorations, no figures.  But the sophisticated engineering of the buildings, with arches and columns, was meant to create light, space, and harmony. Contemplation and spiritual revelation was the goal, using the material world to point the monks’ thoughts and hearts to God.

The stones around the Terrace are a hodgepodge from various places in the monastery, including the dormitory, church, and refectory (aka: dining hall).  So these stones were witness to generations of monks doing their thing. They went to bed at 7pm, side by side. Senior brothers would monitor the sleepers to make sure they were in fact sleeping....though not for long: they woke sometime between 2 and 3am and filed into the church for Vigils. Some would suck on peppercorns to stay awake (hot tip, parents).

Less austere monastic orders got to go back to sleep after Vigils, but Cistercians continued on with a series of reading, praying, confession, masses, and eventually, when the sun came up, trekking outside to work the farm, the vineyard, and the various other chores. So far, this does not sound all that dissimilar to some of your schedules, my dear parents of young kids!

After their busy morning, mostly outside, they would come back into the cool stone walls of the refectory for a (silent) “dinner” at midday, which usually included a hot dish of grain and vegetables, sometimes with fish or egg, followed by a plate of fruit. After some more work and prayer, they would get a small supper, and after the sun started to go down, the monks would perform the service of Evensong, where they lit the candles all through the buildings. Finally, the monks got to drink a cup of ale and listen to the Abbot give a reading. Then bed. Repeat.

The daily cycle continued on for hundreds of years amid these stones that you're sitting on, until the monastery numbers dwindled, and the Spanish government confiscated the buildings in 1835. For a time, private landowners used the fields and buildings to graze and shelter their pigs and sheep.

Enter William Randolph Hearst, the American publishing magnate who decided he simply must have a 12thCentury Spanish monastery for a vacation home near Mt. Shasta. Through European agents, he secured purchase of the main buildings in 1931. Piece by piece, the monastery was crated away and packed into 11 ships bound for San Francisco. Technically, it was against the law to remove Spanish cultural artifacts, and indeed in 1940, Spanish dictator Francisco Franco called for their return. Everyone ignored him.

The stones sat in a warehouse near Fisherman’s Wharf for several years, racking up an extraordinary storage bill. After the financial hits of the depression, Hearst abandoned the plans for the home, and in 1941 sold the monastery to the city of San Francisco for $25,000, which helped him pay his storage debt. The stones were transported to sheds behind the Tea Garden. Famed Bay Area architect Julia Morgan was on board to use the stones to build a monastery museum within the park, similar to New York’s Cloisters, which had just been completed in 1938. But Morgan passed away, Hearst passed away, and a fire burned the crates that marked the identifying information on the stones, important for any reconstruction efforts.  So the stones of Santa Maria de Ovila continued to sit behind the Tea Garden and became a sort of quarry for landscapers and workers in the park, haphazardly removed for various purposes around the grounds, including some unsanctioned hippie circles. Many stones ended up in the Botanical Gardens (known as Strybing Arboretum at the time), and the Japanese Tea Garden.

In the 1980s, medievalist scholar Margaret Burke cataloged all the stones spread throughout the park, and was able to identify about 60% of the pieces that comprised the Chapter House, the part of the monastery where the monks would gather each day to listen to the teachings of St. Benedict, as well as hold elections and ordinations. As fate would have it, her work dovetailed with the passions of the Abbot at New Clairvaux Abbey in Vina, California, Father Thomas X. Davis.

Davis had arrived in San Francisco in 1955, on his way to build the new Trappist-Cistercian monastery on what used to be Leland Stanford’s winery. After landing at SFO, his driver took him through the park to see the stones. The ruins moved him, and he vowed to bring them to his own community, where present-day monks could continue their traditions among the buildings of their brethren.

By 2013, the monks and their team rebuilt the chapter house with two thirds of the original stones while incorporating earthquake resistant engineering. You can visit it, along with the neighboring winery that the monks run with Aimee Sunseri, a fifth generation California vintner. They also grow walnuts and prunes, and work with Sierra Nevada Beer to make their Ovila White Ale, which helps raise money for their further reconstruction efforts.

If you’d like to visit more pieces of the monastery, you don’t have to drive to Vila. A portal from the monastery’s later additions was reconstructed and is now the centerpiece of the USF’s Ovila Amphitheater at Kalmanovits Hall.

Now that you know about the stones, you and your family can be on the lookout for them all over the park, and especially in the fragrance garden and Mediterranean section of the Botanical garden. We’ve even found small bits of dressed stone on some of the more unassuming paths. But note that these stones are not to be confused with the stately carvings found in other parks around the city, and the Wave Organ near the Marina—those are from the San Francisco cemeteries that were razed in the 1940s, with individual graves trucked down to Colma. That’s for another post!

After a calm respite here with your kids—silent or not—on the same stones that sheltered those Spanish monks so long ago, cap off the outing with some ice cream on Ninth and Irving. It's a little indulgent after communing with the Cistercians, but you shouldn't miss the opportunity when you're so close to amazing options:  Hometown Creamery (homemade waffle cones), Honey Creme (my personal fave...honeycomb topping), Easy Breezy Frozen Yogurt (where your kids will love the toppings bar), or Three Twins at Revenge Pies.