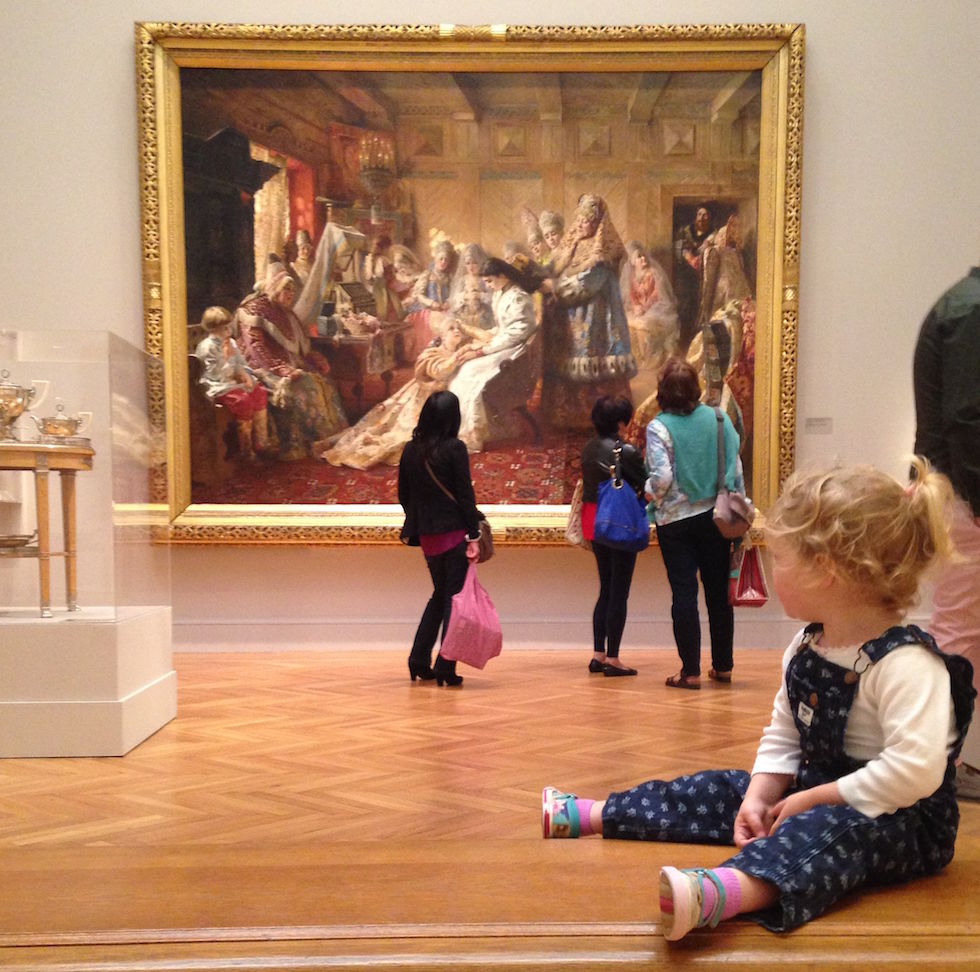 Tomorrow brings another free day at the de Young and Legion of Honor, and another chance to bring your kids to see some awesome art.  Read this, and then head over to the Legion to introduce your kids to a gaggle of well-dressed Russian ladies.

(Side note: On December 1, the de Young opened a new (and free) kid studio. But for this free day, I recommend avoiding some of the early crowds)

When you enter the Legion, turn right, go past the huge table and globes (say hi to the Rembrandt), and turn right again. Keep walking until you get to gallery 17, where you’ll find the Russian Bride’s Attire—the enormous canvas with lots of headdresses.  You can’t miss it.

You’ll want to take a moment to step into this scene. Ask your kids if they can figure out what is going on in the painting.  And then see if your kids can spot three interesting details—bonus points if they can find the cookie (check previous columns for some more fun ideas, and see below for some more specific questions to get the conversation rolling).

Most likely, you and your kids will be awestruck by the size and the sparkle of this work—and you will not be alone. Generations of San Franciscans (and before that, Russians, Parisians, and Chicagoans) stood in front of this same painting and felt the same way.

Konstantin Makovsky created the work in 1889 in St. Petersburg. In that era, large canvases were celebrities in their own right: touring the world, attracting flocks of admirers who paid admission to see them, and inspiring likenesses on all sorts of tchotchkes. In this world of celebrity paintings, Makovsky’s enormous canvas was a star.

While he painted this in 1889, Makovsky was imagining a scene from much earlier—the world of the Boyars (nobles) during the beginning of Romanov Dynasty in the mid seventeenth century Moscow. He had lots of help in conjuring this historical fantasy. Makovsky collected Russian antiques: textiles, jewelry, furniture, boxes, and dishes. He often invited his friends over to his house for dinner parties where he would dress them up and move them about the room to reach a perfect composition. His second wife, a Russian actress named Yulia, helped with these parties. In this painting, she’s the bride.

Your kids will probably notice that she is having her hair done. This was just one important part of the grueling three-day ceremony of traditional Boyar weddings. For the ritual, the single braid worn by younger Muscovite girls (see if your kids can find the one girl with the single braid) was brushed out and redone into the two braids, a signature of the older matrons. The two braids were then pinned up and tucked under the heavily adorned headdress, called a "kika" (ask your kids to find the bride’s kika in the painting).

You and your family may have also noticed that the figures are all women, save the small boy and the intruding man, each in their respective corners. The upper class women of this era were kept hidden in their apartments, away from almost all social engagements with men. They left their house only for church, where they were covered in head-to-toe garments. Servants carried screens to hide the women as they left the carriages and entered the churches. I’m not really sure if Makovsky was commenting on this isolation—the ladies look rather dreary and unhappy, after all—or if he was glossing over this reality in order to paint a nostalgic and sentimental patriotism (see what your four year old has to say about this, lol )

But to be sure, the artist and his circle, 200 years later, were not as devout—nor as chaste—as his historical subjects. Just after completing this painting, Makovsky left for Paris, and left Yulia for his mistress, Maria.

The Bride's Journey to San Francisco

The painting was beloved in Russia, recreated in Faberge enamels. And then it was adored in Paris. And so it was selected to be part of the Russian exhibit traveling to Chicago for Columbia Exposition in 1893. Crowds in Chicago loved the painting, too. And some of them were lucky enough to spot the artist in the gallery—though they would have seen him with his third wife Maria (holding their new baby), and not Yulia, the Russian Bride.  Reproductions (on trays, tea-towels, prints) were found all over Chicago and beyond, and became a popular wedding gift.

Another visitor to the Chicago galleries during the fair was San Francisco Chronicle owner, Michael H. de Young. The Chicago fair inspired him—he wanted to bring something similar back to his own city, promoting California in general, and his own properties near the park in particular. The result was the San Francisco Midwinter International Exhibition of 1884.

And so the Russian Bride’s Attire travelled further west to attend this next fair. In Golden Gate Park, among the ethnic villages, carnival rides, and a recreation of a 49er saloon, the painting still managed to make an impression. Though, I wonder how many viewers had an adverse reaction to this depiction of the old Russian elite. After all, this grand painting was being trotted out just as the current Czar, Alexander III,  was ordering the Pogroms of the 1880s and 1890s, in which soldiers killed thousands of Russian Jews and destroyed entire communities, most notably in Kiev, Odessa, and Warsaw. Many were forced to flee, and some made it to San Francisco. It didn’t seem to bother de Young, who had Jewish ancestry (though converted to Catholicism for marriage).  After the festival, he bought the painting for his personal collection.

Russian Bride’s Attire has stayed in San Francisco since. Art critics have not been kind to Makovsky’s paintings, especially this Boyar wedding series. They have called them “gaudy,” “weighted down,” and “inferior” (all fair points as far as this Mom Docent is concerned). But the public has loved this painting; like many of the transplants to the city, Russian Bride’s Attire has grown roots, becoming an old friend.