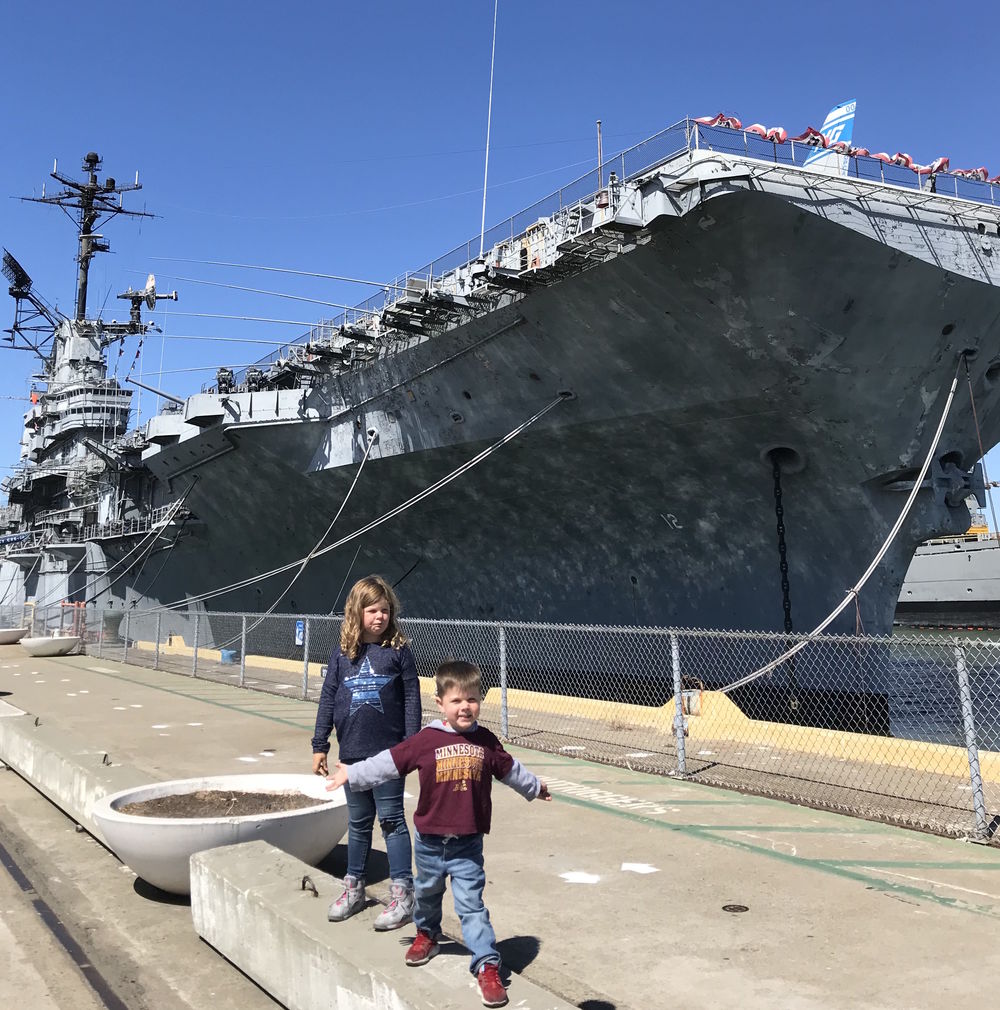 There's no time to read the plaques while tending to the herd! Enter Mom Docent, a new City Blocks series that will be full of stories, tips, and suggested activities for Bay Area sites, museums, paintings, and public works of art. Each entry is intended to be read before heading out to the site so that you can add some context and meaning for your kids (and yourself). Impress your children with your expertise, we won't tell them you heard it here first!

The USS Hornet is an aircraft carrier docked in Alameda. The museum is open daily, 10-5pm, except Tuesdays. There is no entrance after 4pm. Adult admission is $20, youth $10, and children under 6 are free. Be sure to check the San Francisco Library Discover and Go site for half-price passes that are often available. There is ample, free parking. There's one set of vending machines on the ship; I suggest bringing your own snacks and drinks.

Once you arrive, a good bet is to start below deck. Find a ladder on the side of the ship where you just paid admission (ahem, starboard, I believe). Once you get down, you’ll have hundreds of yards of hallways to freely explore, separated by the “knee-knocker” doorways. It’s a good time to ask your kids to guess why the Hornet needed these (answer: if the ship took on water, the raised edges kept the water contained, avoiding imbalance).  You can also ask your kids to look for circular hatches within doors. These are often marked in red, and functioned as escape routes for sailors in a fire or flood. The small circular size allowed for easier opening and escape in a pressurized situation.

As you can probably tell by all this talk of raised doorways and small escape hatches, this part of the ship is not stroller-friendly, nor wheelchair-accessible. The stairways are particularly treacherous. If you have an early walker, take great caution and be prepared with a carrier. Also, before going down below deck, I recommend setting a rule with your kids about how many doors they can go ahead. The hallways and connecting rooms are endless and it is easy to lose an enthusiastic little explorer.

You’ll quickly come across the operations room. With lots of comfy seats, it’s a great place to fit in a feeding if you have a tiny one. A podium, desk, and switchboard offer an excellent chance for the ham in your family to pretend to brief you all on a mission.

Next, you’ll come across several rooms of bunks. The kids are allowed to get in! And as they inevitably climb to the very top beds, you can tell them that new sailors were often given the bottom bunks, where the rocking was less pronounced. Old-timers took one for the team and slept in the top beds.

Back in 1943, when the ship was commissioned, the sailors and pilots used these halls for daily life and naval operations. For the remainder of WWII, the ship sailed the Pacific, launching critical air raids on island bases  and reconnaissance missions over Japan. The Hornet quickly became one of the most highly decorated ships in the US Naval fleet.

Miles R. Browning was the ship’s first captain, at the helm for only a year. He was a naval genius, credited with developing foundational strategies of aircraft carrier battles, and largely responsible for the earlier U.S victory at Midway.  But he was notoriously hard to work with and unliked by the other top brass. And he didn’t help matters when he had an affair with Jane Matthews, the wife of another naval officer, Francis Massie Hughes (whose claim to fame was being the first pilot up in the air, still in his pajamas, after the attack on Pearl Harbor). Jane married Browning, becoming his fourth wife, just a few months before he took off in the Hornet.

By 1944, Browning was out. Officially, it was because of an incident on his watch: a carbon dioxide canister exploded during the showing of a movie on the hangar deck, sending a sailor overboard to his death. Unofficially, he had made a lot of enemies, and the mishap was a good excuse to send him on his way. I’ve waited several paragraphs to finally tell you my favorite part: Chevy Chase is Browning’s grandson through his first wife, Cathalene Isabella Parker, a San Francisco socialite and amateur opera singer. I have read enough celebrity gossip that I am not surprised to learn Chevy Chase’s grandfather was difficult to work with. And if you will allow me this small digression; Miles Browning retired to my own tiny hometown in the New Jersey suburbs.

As you continue on below deck, you’ll come across the infirmary. Personally, I steer clear—all old institutional medical rooms give me the heebie jeebies. But if you and your kids are into it, this is a suitably creepy place to tell them that many believe the ship is haunted. Over the course of its service, more than 300 sailors lost their lives on or near the Hornet, many during combat and downed planes, but also some on shipboard accidents and suicide. And the ship was responsible for an incredible amount of death among naval adversaries. If you believe in such things (and when you’re in the bowels of the ship, it is easy to) there is no wonder that such untimely death and tragedy has resulted in some sort of energy. The ship has been featured on all the cable ghost shows, with lots of slamming doorways, blinking indicator lights, and images of sailors coming and going. But members of the volunteer restoration crew report that there is mostly a positive feeling from these spirits, as if the ghosts are encouraging the telling of their story and the fixing up of their ship.

As you make your way to the stern—for a beautiful view of the city—you’ll easily lead back into the enormous hangar deck. At the close of WWII, when the Hornet was part of Operation Magic Carpet, the GIs were housed here on the deck in 3-5 story bunks, cramming in as many solders as possible to get them back to San Francisco, and then homeward.

From the hangar deck, you can take an escalator up to the flight deck and the entrance to the bridge. There is a formal bridge tour given regularly by volunteers that gather here near the top of the escalator. It isn’t recommended for small kids because of the stairs and the length of the program, but we asked nicely and had an abbreviated tour where the kids got sit in the captains chair. If you think your kids can handle the stairs, summon your (polite) Jersey nerve and ask. It is worth it!

The Hornet stayed active through the Korean and Vietnam wars. And in July 1969, in the midst of Vietnam, the ship was part of the Apollo 11 mission, charged with recovering the landing module of Neil Armstrong, Buzz Aldrin, and Michael Collins after their splashdown in the Pacific.

It must have been a joyful and exhilarating break for the crew from the grind of Vietnam. President Nixon and Henry Kissinger flew to the Hornet for the event. When you go out to the flight deck, you can find the presidential seal on an external stairway marking the place where Nixon gave his speech.  John McCain Jr., Commander-in-Chief, Pacific Command was also there. For him especially, this mission was probably a welcome and inspiring piece of good news. At that moment, his son, John McCain III was in the second year of captivity in Hanoi.

The splash-down of the Apollo 11 crew was not without its dangers. The landing module, like all NASA equipment, was rigorously tested to ensure the astronauts' safety. Back in the Hornet’s hangar, one of the test modules is on display. It is pretty banged up; they tested this particular one on hard surfaces as well as water.

NASA was also very worried about space germs. They didn’t know if viruses and bacteria could be found on the moon and infect the humans down on earth. So when the recovery engineers met the landing module bobbing in the ocean, they opened the hatch and threw in three BIGs (Biological Isolation Garments). The astronauts put them on before being transported to the Hornet, where they wound through the Hangar deck, straight into the airstream (aka Mobile Quarantine Facility).

Have your kids look for the red footprints on the floor of the Hangar deck. These commemorate the exact spot where the three men took their first steps back on “Earth” (or, a ship). The airstream on display is not the original quarantine unit—that is in Washington, D.C. But you can see how it was outfitted with seats, a kitchen, and a bathroom. The men ate individual meals out of a prototype microwave oven, drank martinis, and conversed with people outside the window using a special speaker system.

When the Hornet reached Pearl Harbor, the unit was lifted onto a truck and then inserted into the berth of a plane, where it was flown to Houston for the remainder of the 21 day quarantine. Inside, with the astronauts, was a NASA doctor, William Carpentier, and NASA recovery engineer, John Hirasaki. At the time, his colleagues joked that Hirasaki drew the short straw among the engineers, having to stay in quarantine and exposing himself to any hypothetical moon pathogens. But in subsequent interviews, Hirasaki said he wasn’t that worried, and it was an honor to spend time with the Apollo 11 team, being among the first humans to examine moon rocks within earth’s atmosphere.

Despite all their scientific accolades, NASA engineers and pilots often have a touch of the poet. Neil Armstrong, for instance, travelled to the moon with tiny pieces of the Wright Brothers’ plane. And so it’s likely that the significance of the Hornet’s arrival at Pearl Harbor was not lost on Hirasaki, a Japanese-American. His family had owned a thriving agricultural and oil business in Terry, Texas since the beginning of the twentieth century. His uncle was a star football player at Texas A&M. But the family’s success and integration into American life didn’t prevent Hirasaki’s grandfather from being detained for two months near San Antonio at Camp Kenedy, along with west coast Japanese-Americans and many Japanese men and women deported from South America into the camps, an experience that left a lasting stigma on his family and business. Only a generation later, Hirasaki was sealed inside a tube, looking at moonrocks, being lifted off the WWII-era carrier, and gliding through Pearl Harbor—the bombing of which prompted the U.S. government to imprison citizens like him.